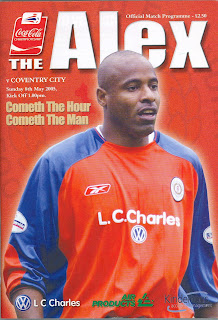 It was the last day of the 2004/5 English Football League season, so I scoured the fixtures looking for a match which really mattered; one where a presently unresolved promotion or relegation issue would be clarified.  And one which stood out was this encounter between Crewe Alexandra and .  were safe in mid table, but Crewe had begun a free-fall the previous January, following the sale of leading scorer Dean Ashton to .

The club had, quite remarkably, failed to win a single one of their 19 matches since his transfer and, following a 5-1 humping at the previous week, had fallen into the relegation slots for the first time that season.  So basically, Crewe had to win and hope – sitting two points above them - did not.  Overhauling was also arithmetically possible, but was a considerably longer shot.

It then struck me I knew absolutely nothing about the town of .  I had some vague recollection that there was some important railway connection, so guessed it may be in the somewhere.  Also, Tom Robinson’s (fictional) brother Martin hitched there from Clapham each week, so it couldn’t be too far from , I reasoned.  But no, there it lay, not too far south of , and well within reach.

Arriving rather closer to the kick-off time than I had anticipated, I found I had a lengthy trek to the ground from the available car parking.  Presenting myself at the ticket office, I endured the following conversation with a rather officious girl manning one of the counters:

Self – A ticket for the main stand, please.
Girl – Have you registered?
Self – No, I did not realise I had to.  Can I do it now?
Girl – Sorry, no.  The deadline for registering expired 24 hours ago.
Self – Oh right.  Is the game sold out then?
Girl - No, but we decided in order to stop Coventry City fans getting in to the home area, to make all non season ticket holding home fans register with the club 24 hours prior to the game.
Self – Well, very clearly from my accent I do not come from .  How do I go about getting a ticket.
Girl – (with just a hint of a smirk) Sorry, you can’t.
Self – (putting on best puppy-dog expression) I have just driven three hours down the road from , you are surely not going to send me back up the road, denying me entry to a game which is not sold out.
Girl – (trying to hide growing smirk) I am sorry, but we have to protect the families who are attending this game.
Self – I am an overweight, balding, middle-aged male with angina and diabetes here on my own.  Exactly what threat do you feel I pose to the families of This Good Town?

Well, I didn’t really say that last bit, as I think by that time I realised I was dealing with the Monkey, and not the Organ Grinder.  But quite how setting a 24 hour deadline for registering for tickets would dissuade any organised supporter getting in to the ground baffled me.  It just seemed lazy management.

Anyway, all I did was wander out into the car park and, putting on my least threatening smile, approach a couple of elderly Crewe supporters who, after listening to my tale of woe, were delighted to purchase a ticket for me.  We discussed the perilous situation their team found itself in, and I heard the real fears they had for their club should it go down.

I mentioned that my own club were similarly involved in a relegation battle, and suggested their Good Samaritan act may bring Good Fortune to both of our clubs.  They said they hoped so, and we parted heading to different areas of the ground.  I was in the big newish main stand which, although an impressive structure, did seem to overly dominate the rest of the compact little ground. 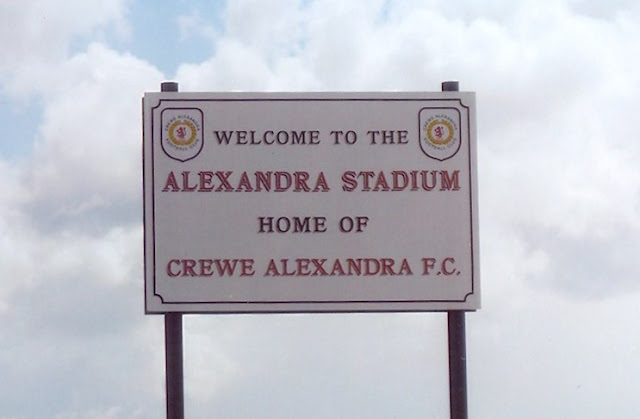 The match began with home side on the back foot almost straight away, and ’s former striker Dele Adebola headed an easy looking opportunity over the bar after only 3 minutes.  Any unworthy thoughts I may have had, that the Nigerian may have been going a touch easy on his old pals evaporated on 25 minutes, when ADEBOLA headed in a cross from Stephen Hughes.

Crewe looked utterly disjointed and bereft of any ideas at this point, and were more than a little fortunate to reach half-time only one down.  The one gleam amongst the gloom was that Gillingham were also losing, at .

And then it came to pass that Dario Grady worked his magic during the break.  The anonymous Neil Sorvel was withdrawn to make way for Michael Higdon, and winger Luke Varney was somehow persuaded to get his finger out and start making a nuisance of himself down the right.

Nine minutes was all it took for to draw level, HIGDON converting a pass from Varney, although I felt the visiting defence did seem to allow him an awful lot of time to turn and shoot.  Then the news came via a thousand radios, that had levelled.  It changed nothing really – still required a win.

I am sure it was not the case, but just seemed like gradually lost interest in the proceedings.  Visitors’ attacks became fewer and fewer, and soon became camped in their opponents’ half.  Then with 18 minutes remaining the breakthrough came, as Irishman Steve JONES slipped a cross from (inevitably) Varney past ‘keeper Clayton Ince.  And then everyone around me believed.

Yet a mere 5 minutes later, a strange hushed murmuration arose within the stand, accompanied by a few groans, and not a few expletives.  Gillingham had scored, and were heading for the drop, and no amount of further goals scored here would affect things.  I cannot really explain what happened next, as I found my own anxiety levels growing exponentially at this point.  I was here as a neutral – there to observe, not to get caught up in all this nonsense.

Yet I found myself desperately willing to equalise, to help out these strangers all around me, to save this club from relegation.  This club which meant nothing to me.  Indeed, this club which had actually tried to fucking ban me from getting in!

And it worked !  With just 5 minutes remaining until the end of the season, the wonderfully named Eugen Bopp thumped in a volley for , and the whole stand went potty.  Me included.  Utterly bizarre.  As the Great Man once said “Football? Bloody Hell!”